These were to be the first few dry days in what seemed weeks of rain and the wait was tormenting and creeping inside, while thinking of spending time amongst the hills, it was time to head out again. This trip was in essence a sale’s pitched to strong repeat client Jonas and new rock climbing client Colin.

Mountaineering in the Coast Range can be a daunting task for the untrained or casual alpinist; approach to the Alpine is often difficult and requires good Navigation Skills and Local Knowledge. Let alone physical stamina beyond your average human been. Guillaume was itching to go and find out how much snow we had received at high altitude. Recently, the weather had turn 180 degrees and the winter had taken its grip and semi-permanently cloaked the mountain tops with an early layer of white gold, the fluffy stuff we call “snow”.

We were expecting to discover 20cm of new snow at 1800m and more the higher you went. The Plan was simple and involved flying in to the Tantalus Range with Blacktusk Helicopters early the first day and climb as many peaks we could before our scheduled Heli pick up at 5pm on our third day. – “That sounds great, I’m IN! “– said Jonas, though physically strong and keen, Colin was new to the Alpine scene, traveling from Australia with limited experience in the mountains. The Tantalus Range is home to some of the best mountaineering trips on the south coast and is mostly accessed by Helicopters. The rock is good in most places and the glaciers are stunningly beautiful. They are many variations and opportunities alpine climbing objectives.

We met at 630am at the Heliport for morning planning and helicopter safety briefing, We were packed and ready for the unknown. We also took time to revise our emergency plan before leaving Terra Firma. Our plan included several safety layers of risk analysis and management of hazards while prepared for unexpected outcomes. We carried Spotconnect, gps, maps, compass, radio and phone devises for emergency protocol. We carried ropes, snow pickets, belay devices and many more mountaineering tools to be used in the conditions and mountain terrain features we were to encounter.

Phil, our pilot, instructed us to start loading and gather around the 206 Jet Ranger left boarding doors for safety briefing. “Never, ever go to the back of the aircraft!” – He said with an assertive tone: “that’s the danger zone.”- The briefing last about 15min. and soon we are all on board and excited about the idea of mountains and blue skies while waiting for the engine to warm up to 800C before we can take off. The 12min flight felt like seconds and just like that we were all alone, left behind in an environment without recent signs of human activity. The landscape was covered with a thick blanket of snow, once Phil had disappeared, the air was crisp and clear and the sky was deep blue.

The stoke inside was boiling, but that feeling quickly evaporated the minute we stepped out while unloading our equipment from the heli. Every step we took was followed with a hollow thump sound and a sudden collapse and drop through a thick snow crust down to thigh deep cold faceted snow. It turned out the temperature had risen before dropping down and formed breakable crust conditions. Essentially, the worst type of conditions known to mankind. It quickly became obvious that the dream trip had come to a total crash from the sky. It was clear, traveling at this altitude was going to be a challenging concept and the plan had to be completely scrapped and a new one had to be broth to the counsel (Jonas, Colin and I).

We made the decision to climb high on Dione Mountain by sticking to the ridge, where we would find steeper and rocky terrain, hoping for less snow where options to protect a leader would improve. So, we set off onto the long south ridge of Dione finding less than ideal 1km/hour travel conditions before reaching a high point of 2200m. Our slow progress was evident and the chance to summit any of the peaks above 2000m was weak.

We made the hard decision to turn around and headed back down to the col. We followed our up track back to the Haberl Hut where we had stash our overnight gear and food, we packed up our bags and headed down the Serratus Glacier, hoping for conditions to improve at lower elevation. The new plan was to traverse over Alpha Col and descend to Lake Lovelywater so we could attempt to climb Omega, Iota or Pelops Mountain.

All under 2000m of elevation and seemed to have received much less snow as we notice flying by earlier in the day. Travelling down the glacier was hard work at the front; the snow was consistently the same until you reach the elevation of 1750m, by now the sun was high and the snow was turning isothermal (wet and sticky).

We made slow progress and finally arrive at the toe of the glacier. The guys were eager to get onto steeper more technical terrain, so we spent the next couple of hours learning crampons, ice axe and climbing technics on the steep icy terminus wall. We practiced French technics; pied canard, pied troisième, piolet traction, piolet panne, piolet poignard, piolet ramasse, monkey, off-set and a few other mountaineering application like ice screws and anchors.

Forced by day light and the need to set camp, we continued down and across to the north ridge of Alpha, were we could find a good camping site, below the snow line. Our search was rewarded by a stunning sun set with undisturbed views of the Sea to Sky all the way north to Mt-Currie. Food and drinks before lying down under clear sky and a bright milky way. 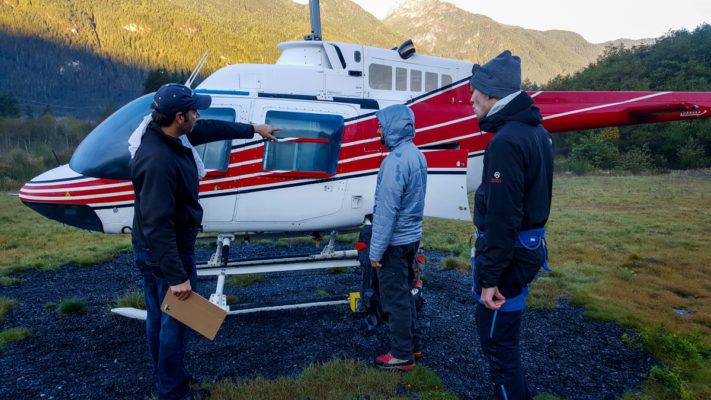 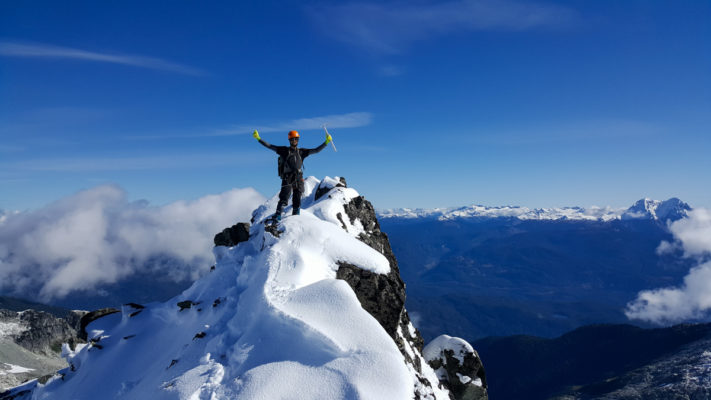 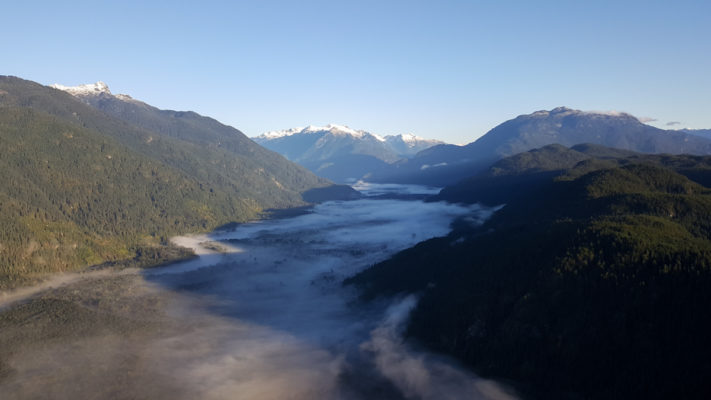 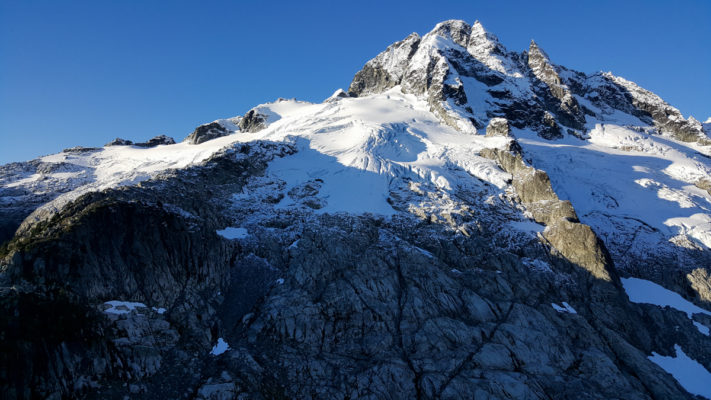 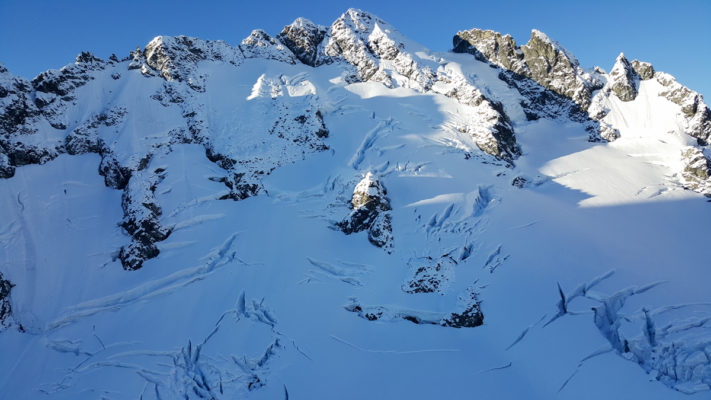 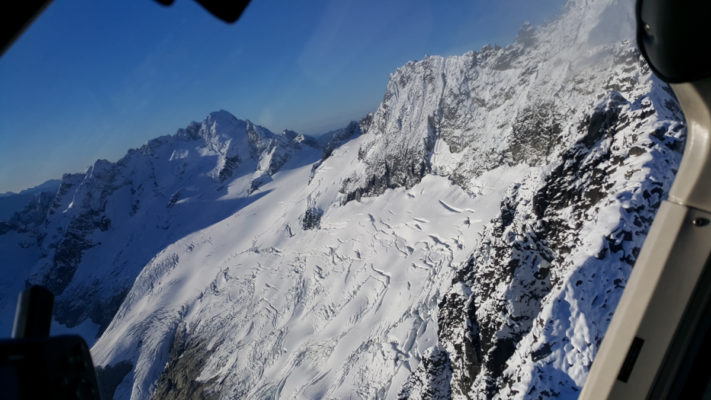 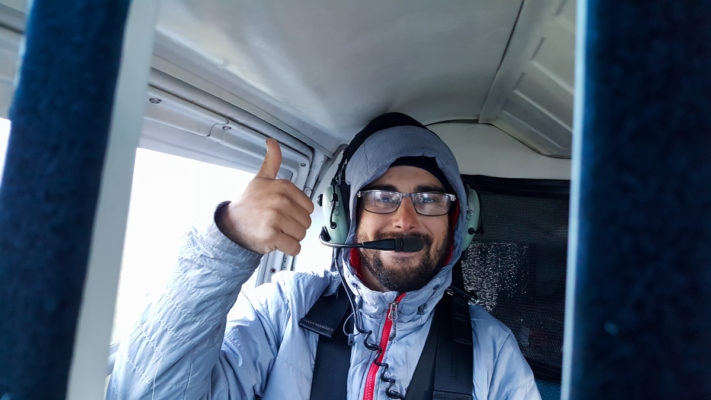 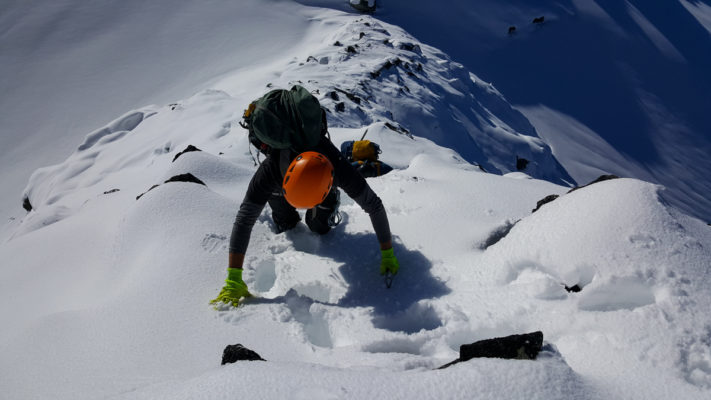 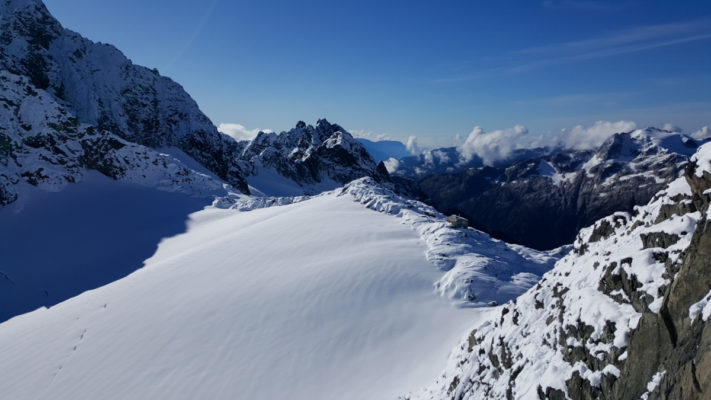 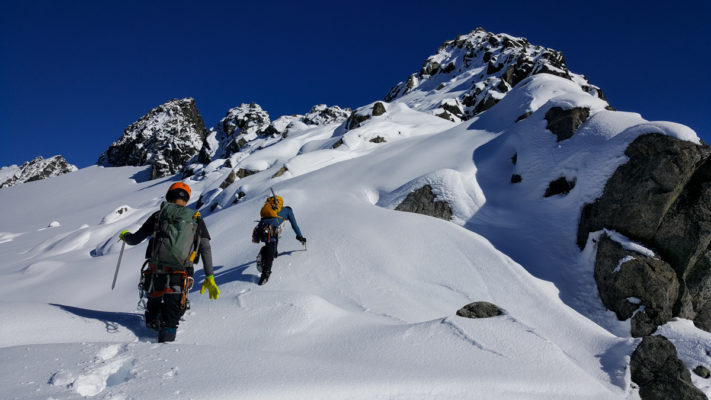 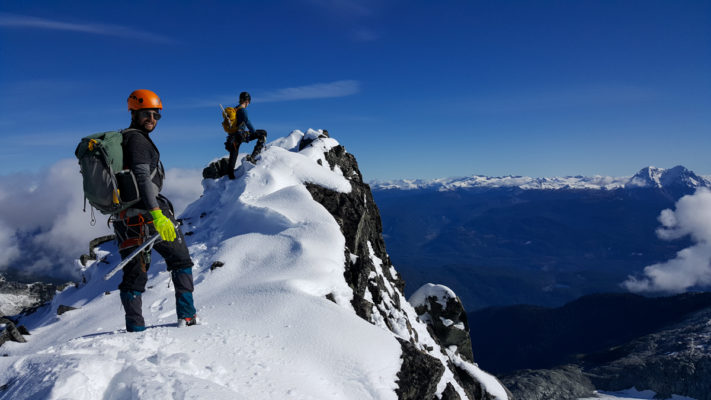 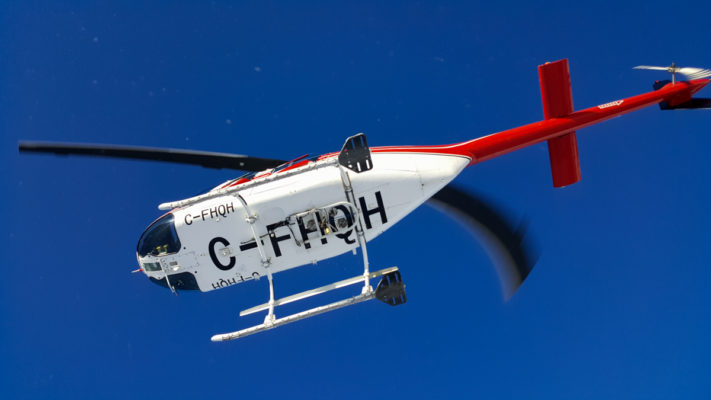 The Alarm clock pierced through the still alpine air at exactly 6am. The sun was rising  behind Garibaldi Mountain casting shadows and contrasts over the landscape; the sky was orange for a few seconds while the steam from our coffee cups was purposely vanishing into the cold mountain air.

A new plan was to be executed; a careful analysis of the conditions and terrain hazard revealed challenges beyond our capability as a team to safely and effectively travel to the Alpha-Serratus Col. We had observed numerous size 1.5 avalanches on east, north and south facing mountain slope the day before and today was to be another warm sunny day in the alpine. All this new snow hadn’t bonded to the mountains yet and would need a few days to heal. Combined with the traveling snow conditions and heavy packs, since we had paid for a return flight anyways, we made the decision to use our flight out today instead of on our third day and have him fly us around to Lake Lovelywater so we could try to climb Mt-Omega 1860m, an attractive summit south of the lake.

The result would be an exciting exit down Lake Lovelywater trail and cable crossing the Squamish River on day 3 instead. The boys both agreed and Phil from Blacktusk helicopters pick us up at 730am from our camp and flew us around Mt-Alpha to Lake Lovelywater so we could continue our journey in the mountains.

Within minutes we were in a completely new surroundings and everything felt a bit surreal. One minute we are having coffee at 1700m watching the sun rise and all of a sudden we are hiking up with day packs at 1400m in search of flagging tape that would help us find the north ridge of Mt-Omega.

After a few detours and wrong turns we finally made progress passing small ponds, creeks and ravines while grabbing huckleberry and rhododendron shrubs looking for a trail that didn’t exist. There were the odd blue or pink tape, but for the most part it was good old “bushbashing on the coast” until you reached subalpine meadows and subsequently open alpine terrain. Seldom had we stopped for breaks, only for food or water, knowing we had to move quickly if we would stand any chance of summiting before dark.

The broad shoulder was quickly shrinking into a narrow ridge with a least two deep notch requiring ropes, anchoring and navigational skills to overcome. Our progress was made slower by wet seeping cracks, blank rock faces and snowy ledges texturing the ridge. We even came across grizzly tracks, wondering how and why they ever consider climbing this war up the ridge, was mind-blowing.

We sat there eating the rest of our lunches, beside a massive Grizzly poop for a few moments, looking down towards Squamish and across the Tantalus Range, staring at the last 180m of climbing with running out day light. Confronted with adversity, difficult conditions and depleting energy levels, we decided to turn around and headed back to camp. It was now 4pm, the turnaround time we all had agreed on for the last possible push to the summit, knowing that the descent was not going to be neither obvious nor easy, we had packed head lamps.

The boys were keen for an adventure down the west side of the ridge, so we descended directly to Iota meadows, the normal descent is down the north ridge, the way we came up. At first it was easy meadows and connecting ledges, quickly we were forced into a steep gully that turn into a waterfall which required 4 rappels and a few slings and would vertically land on the talus above the meadows. After a fun few rappels, thank god for 70m ropes, we were back to the trail and headed to camp along the lake with headlamps and tired legs. A late dinner with a few good laughs at the day’s events was all there was left of us. We all snored good snores. 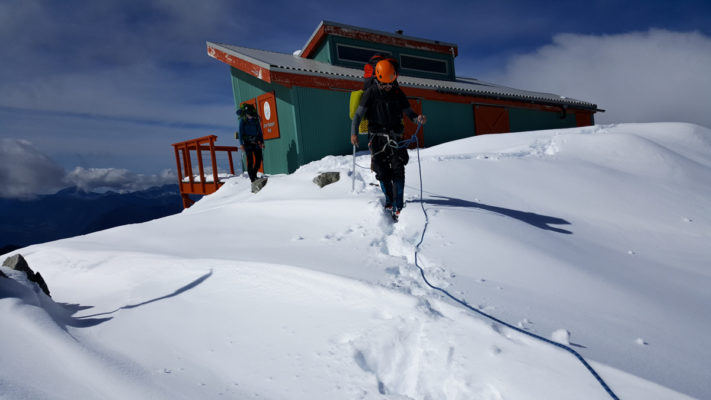 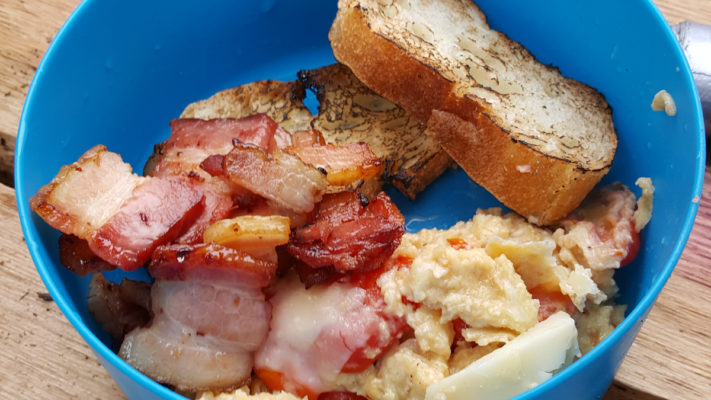 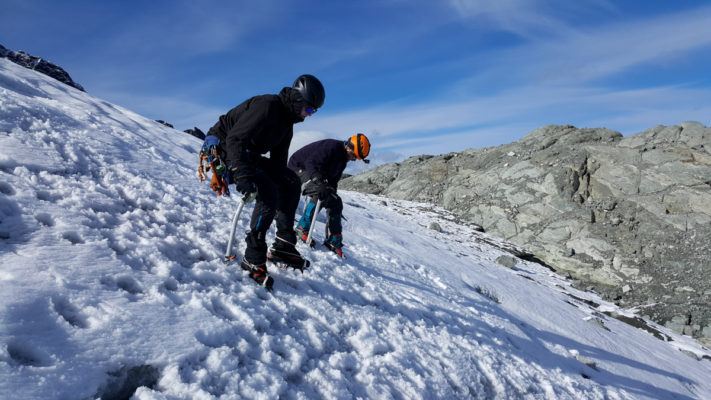 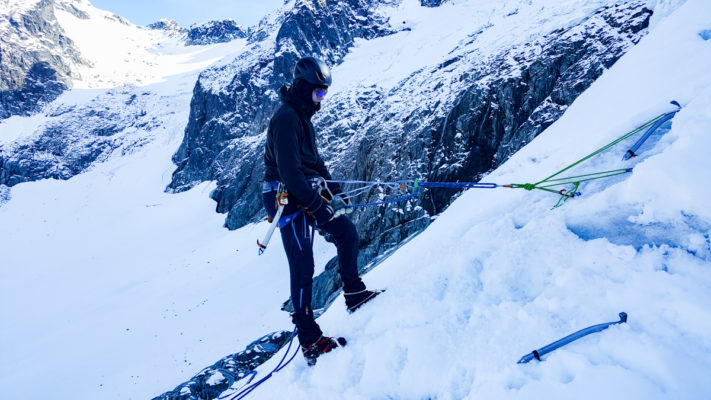 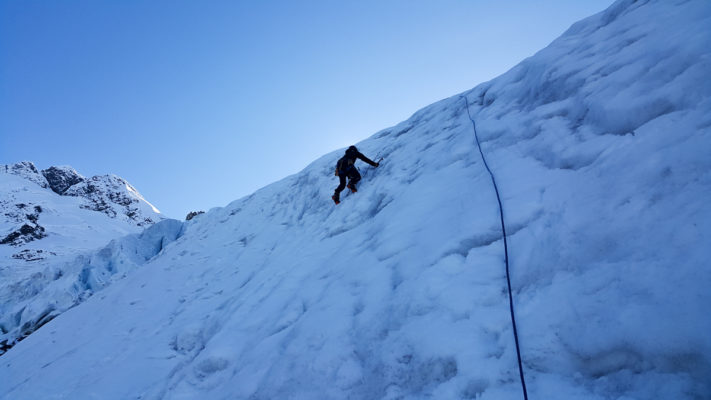 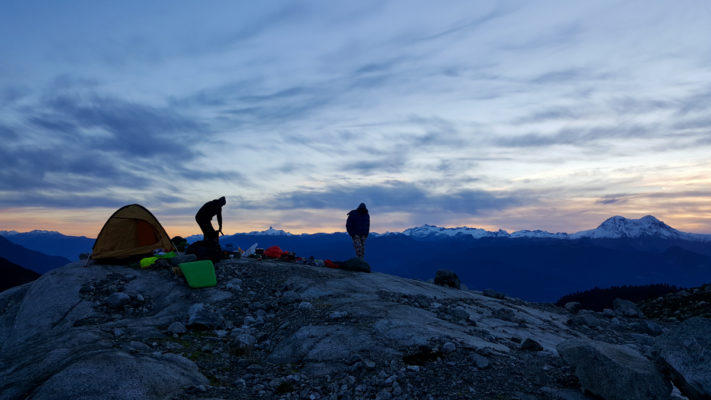 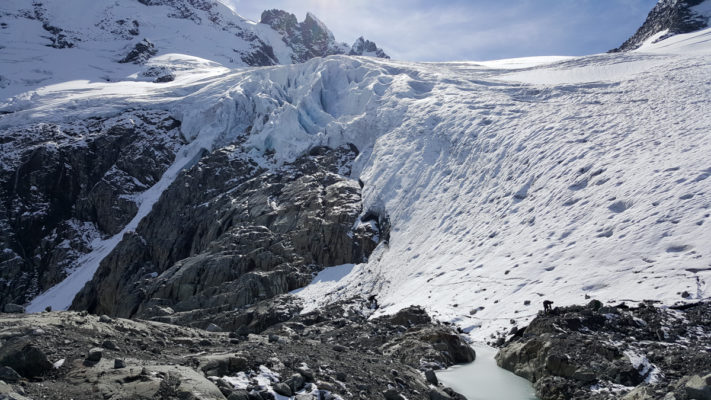 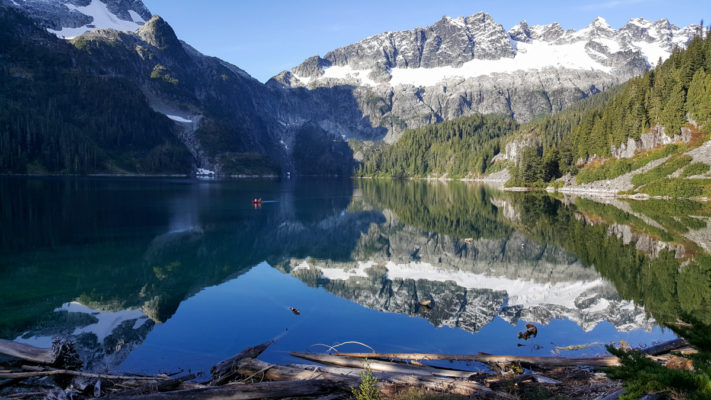 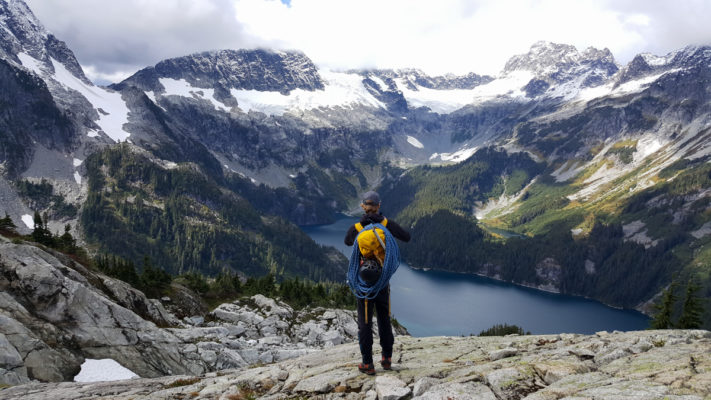 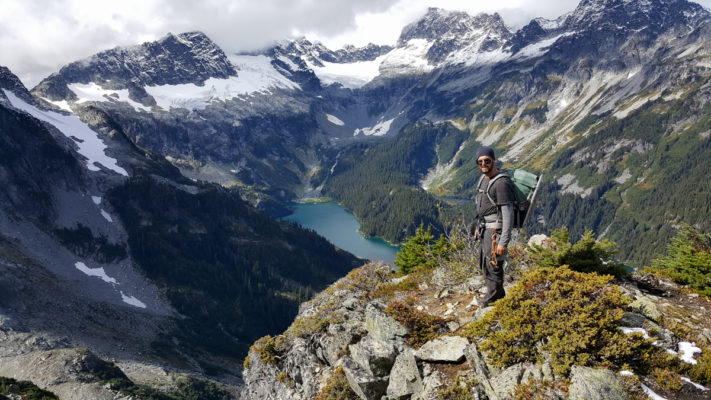 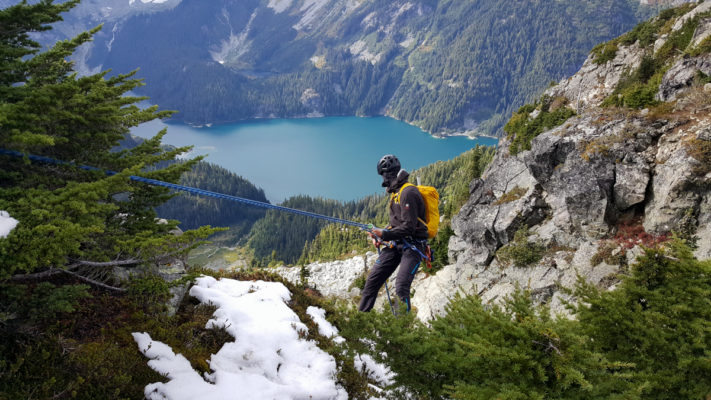 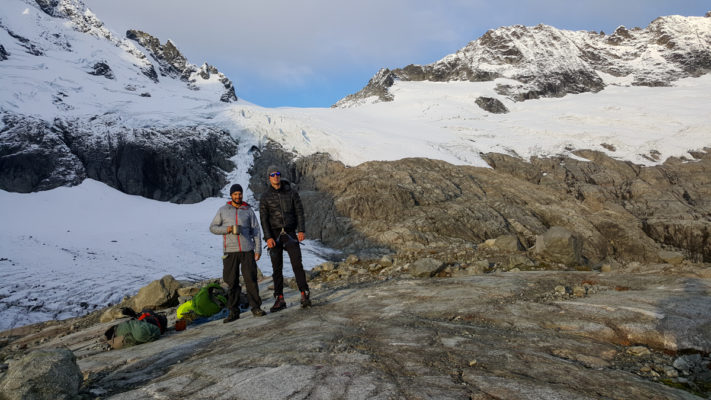 The day started with coffee and breakfast under cloudy sky and tired legs, the weather had change and rain was in the forecast. The original plan was to head back to Mt-Iota and climb some ice and rock, but once again that plan had to be scrapped and a new one summoned out of discussions and personal inputs.

Considering the long hike out and complicated cable crossing, the boys were keen to stay at camp, practice crevasse rescue skills on dryland and begin our exit under rainy sky. We left camp at 1pm, the trail crosses the creek and follows a series of waterfalls in a spectacular rain forest to finally arrive at this cable crossing high above the Squamish River, a daunting traverse using two personal anchoring leash and attaching your backpack with a separate line behind you shuffling 100f above the surface of the river.

Luckily for me, I was last and there about the time I was going to start the crossing, two nice SUP girls (Kimberly and Sally) were floating down stream and offered me a lift to the other side, which I did not dare to refuse, there I was across, joining Jonas and Colin for a final walk through the mud back to civilization. 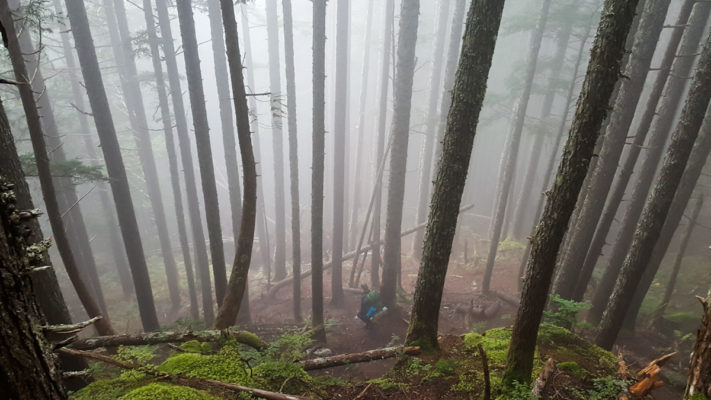 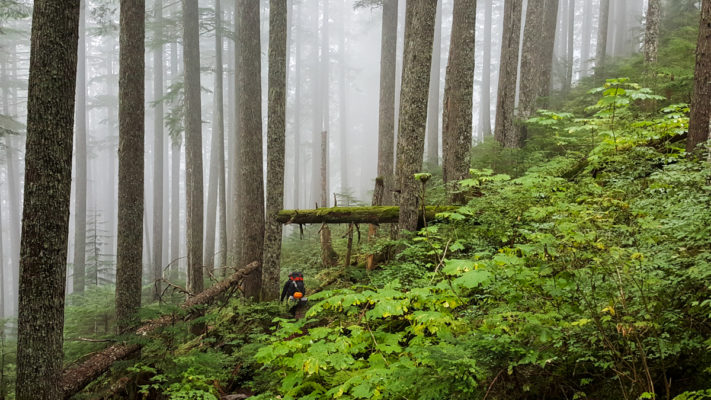 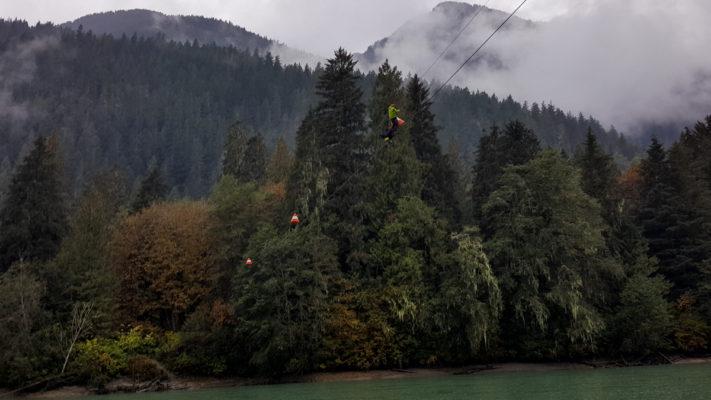 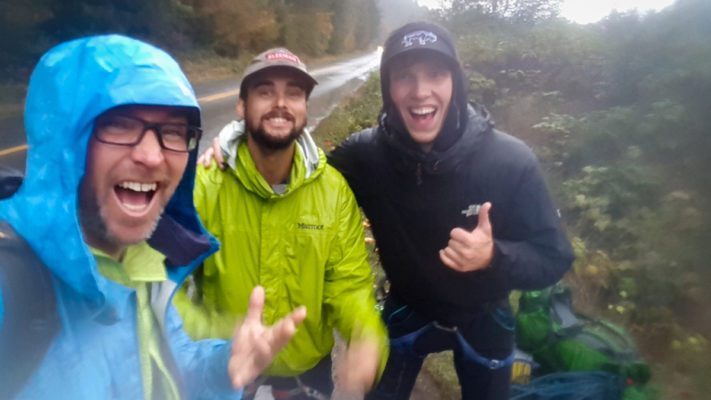